By the end of 2018 HP laptops were able to break the records and move up to the second place in the notebook rankings. One of the main reasons behind this level of success was the diversified variety HP laptops offered ranging from entry level budget notebooks in which you can just stream movies up to expensive powerhouse gaming notebooks. Thus, HP could retain a large number of customers during the past years because of their vast collection. 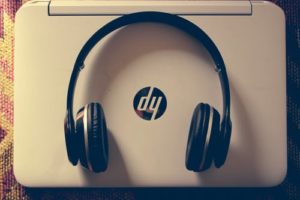 The elegant and rugged designs was also another key strength of HP laptops over the past few years. From Book to EliteBook range, the elegant design technology was praised across the notebook market.

Additionally, HP laptops are popular for the excellent tech support they offer including the shipping paid warranty.

HP Omen 17 – was one of the stand out innovation of HP laptops and is renowned for powerful and attractive gaming features.

Initially advertised as the “world’s thinnest laptop” , which sooner got beaten by the Acer Swift 7 in terms of thinness, HP Spectre 13 is rather like a ballet dancer who is also a bodybuilder. Spectre 13 was embraced by the customers amidst both pros cons and verdicts because of its extremely powerful and efficient.

Spectre 13 is extra thin up to 0.14 inches and comes in ceramic white and pale gold color schemes which gives it an extremely fancy outlook. Even though it comes ash silver and chrome luxe ranges, the ceramic white range stands out to be the best selling color cause unlike the ash silver model, it barely picks up any fingerprint.

The hinge in Spectre is sandblasted and the screen is surrounded by a thin bezel from three sides. The touch pad is residing near the keyboard with some gold trim to match the lid. They have trimmed the excess length and width but it still outclasses other notebooks because of its cleaner outlook. The model is not only slimmer but also tinier than the last year’s design. Though it slimmer up to an extent where it seems as if there’s no room for ports but it contains 4 ports including 2 thunderbolt 3 ports,1 USB- C port and a headphone jack.

The Spectre has 13.3-inch 1080p touch screen which is considered to be colorful but not up to the standard of other competitive laptops. The screen of Spectre is one of its cons because of the image shadows become darker in the screen. 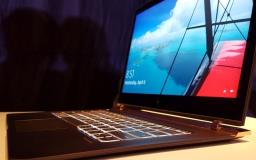 Even though the smaller chassis makes it seem impossible to fit in a keyboard of minimal 1.3-millimeter travel and 70g press force to press it, the keyboard feels clicky and tactile. The touch pad is also spacious and accurate.

The speakers have been moved from the sides to the top of the keyboard and the volume is about 80% higher, enough to share a movie or a Television show with friends.

Better and improved multitasking experience with a 1.8 GHz Intel core i7-8550U CPU, 8GB RAM and a 256GB solid state drive inside the notebook. The shorter battery life is another one of the cons of the Spectre 13 as it lasts not more than 7 hours. So the downside is that you have to carry around the laptop charger everywhere you go.

It is well apparent that there’s particularly no room for the Spectre to generate heat inside because of the slimmer design but the bottom heats up than most of the other competitive laptops in the market.

The HP Spectre comes with a 1-year warranty and paid shipping for repairs.

HP offers a set a handy software along with the Spectre including the JumpStart Program which contains a set of tips on how to operate the laptop, Netflix, McAfee and a Dropbox.

Shop at Daraz for best HP laptops in Sri Lanka.